Leonardo Lanzoni, historical character of the Italian Floorball, President of Viking Roma Floorball Club, I dare say, the man who is always present, a person I respect a lot.
He follows the Italian Nationals since 2006, first as Team Manager and then as National Coordinator, he has often represented the FIUF in the IFF Assemblies, and has been a member of the organizing committees of all the qualifying tournaments for the world and the Eurofloorball Cup that took place in Italy.
One of the fathers of the Italian floorball that can be classified in the hall of fame.
Always present on the playing fields, you see him arrive even if his presence is not expected, always ready to help anyone, today Floorballmaniatv wanted to pay homage to his many years of Floorball with an interview.
1) Hi Leonardo how are you? I will not ask you the presentation question, because everyone knows who you are, but tell us, how many years have passed since you started with the floorball?
More than 20 years have passed since Simona Tanese, wife of Secretary General Jorgen Olshov, involved me in this wonderful adventure.
2) Many years ago, finding players was very difficult, can you tell us how you managed to get the kids involved in this sport?
My involvement in the promotional activities mainly concerned the operational phase (organization of demonstration matches or demonstration sessions); the first contact and guidance activity at the schools was carried out by Jorgen Olshov, who from 2000 to 2007 was President of Viking Roma before me.
We went to the schools (elementary, middle, high school and technical institutes) presenting the Floorball project to the teachers of Physical Education.
if the professors showed interest, a promotional kit of clubs and balls from Unihoc was loaned for a few months, and a demonstration session was organized to illustrate the basic technique and rules of the game.
The professor was followed and supported in the coaching phase, and school tournaments were organized periodically. 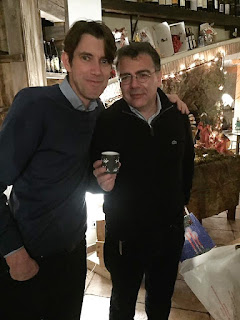 3) Many players, who today are Italian floorball men, tell us "I remember when Leonardo came to pick us up with the car to take us to training, and then he also brought us back home"; why were you doing this?
In the early years, Viking Roma players were all adults; as the spread of the floorball grew, we started to insert some young high school students who were particularly fond of floorball.
Immediately the problem arose of supporting the families of the boys, who did not always have the opportunity to bring the boys to training (and then come to pick them up); It was natural for me to put myself at their service, since I lived alone and had no family ties, to support the passion of those boys.
Then over the years the base has expanded, and the kids I helped have become adults, have taken a driving license and started supporting the younger ones as I did, and this pleases me because it means that the values of solidarity and passion for floorball have spread over time.
4) How much have the training methods changed from the beginning to today? Do you think you need more physicality or more technique today?
I am not a coach, in these 20 years I have mainly dealt with the administrative and organizational aspects of floorball, but I was lucky enough to watch floorball grow in Italy and in Europe.
If I look at the training methods, with a particular focus on Viking Roma, I can say that in the last 5-6 years there has been a strong evolution towards a greater professionalism in the approach to training, which has become the basic component for obtaining important results.
Athletic preparation and intensity of play have become essential elements in a sport that has become increasingly physical in recent years.
5) Today you are President of the Italian champion team; what did you feel on the day of the victory, against Gargazon-Sterzing?
A great satisfaction, because the path started in 2016 with the conquest of the Italian Cup had finally led Viking Roma to the victory for the third time.
The subsequent victory of the Italian Cup effectively closed a cycle of important results, especially in the Under 17 and Under 19 categories. We have a group of very good young people who allow us to think about the future with serenity, and to relaunch the challenge to the Scudetto for the next 5 years. 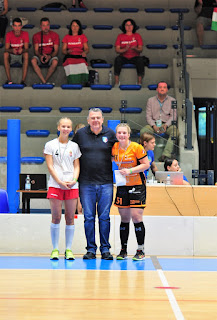 6) How do you manage an Italian champion team?
A complete answer would require a lot of space. If I want to summarize, I would say that the fundamental elements are structure and organization, i.e. a Board of Directors that plans and directs the club's activities, and a group of people with specific skills that deals with operational activities: organization of meetings and transfers, athletic training, communication ( both internal and external), coaching at various levels (senior, U19, female, youth).
7) Is it true that after the victories you offer lunch at Mac Donald's to the team, or is it a legend?
Yes, it's true. I do it when we go away, if the team has deserved it though. For Sunday lunch we look for a Mac Donalds (or similar) to eat something before starting the return journey to Rome.
In the beginning, it was above all a way to help kids keep their travel costs low. Then it became a way of thanking them for the emotions they transmit to me and the effort they put into achieving the result.
8) You are a big A.S. Roma soccer fan. Can you describe your love for Rome and your love for Viking Rome?
AS Roma is experienced viscerally, as a fan who follows the matches of the team (I am a subscriber for both the Serie A and the European cups) and is part of a Roma Club, therefore without particular responsibilities. For Viking Rome is different; in addition to the passion that leads me to devote most of my free time to floorball, there is also the responsibility of being President of the club, and therefore the need to identify myself in a role that requires seriousness, thoughtfulness and foresight. In common AS Roma and Viking Roma have the great emotions that they can transmit to you for a great result achieved or even just for a gesture or a word exchanged with a person who shares the same passions. 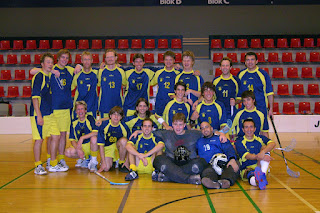 9) We said at the beginning, making your presentation, that you have repeatedly represented the FIUF at the IFF assemblies and conventions; how important is it for Italy?
The presence of Italy in these forums is very important, because it helps develop knowledge and contacts useful for the growth of floorball, both in Italy and all over the world.
The Association Meeting, which meets during the Women's World Cup, is an important opportunity for cultural exchange; the representatives of the various national federations discuss important issues of floorball development and growth; IFF incorporates the indications coming from the associations and develops them into action plans. Instead the IFF Assembly, which meets during the men's World Cup, is more focused on administrative and organizational aspects.
10) Maybe here we are: soon, after a lot of work, the agreement with FIH - Italian Hockey Federation could finally become operational, which will allow us to join the CONI; if so, what would change for the Italian Floorball?
It would certainly be an epochal passage; being placed within a National Federation will allow us to have important tools to improve administrative management, promotional policies, and the possibility of accessing quality sports facilities.
11) Let's talk about the national team. You have been present continuously since 2006 in the management of the national teams, a sign that you care and a sign that it is something important for you; what should change to make our "Azzurri" teams grow even more?
The main difficulties we encounter concern two aspects, one economic and the other technical.
From an economic point of view, it is currently difficult for one of our young people, especially if they are students, to bear the costs of being part of the national team. In recent years, the FIUF has intervened with some support actions, such as the crowd funding and the rationalization of the organization of the gatherings, which have had a good impact on cost containment, but further effort is needed.
The agreement with FIH from this point of view could provide us with further options. From a technical point of view, recent international experience at various levels, both for the national team and for the club, show us that the central problem is the intensity of the game.
Basically, the clubs that need to intervene on this aspect, setting their training on new methods that can be acquired by involving floorball experts from the top nations.
12) Which is the player, the coach, the character in the Italian Floorball that you appreciate most? And why? You can even say more than one.
There are many people who would deserve to be mentioned, but having to choose I will show you those who have sent me the most emotions.
As coach Miki Frotscher, the last coach to lead a national team at the World Cup (it was 2010); the qualifying week in Spain was fantastic, a great emotion and an indelible memory.
As defender Fabio Rocco, protagonist of the 2010 World Cup, for me the best in his role. As center Andrea Iezzi, record of appearances in the national team, three badges and an Italian cup with Floorball L'aquila, magical. As striker Tobias Mores, also a national for years, five badges with FBC Bozen, great technique and quality; I was very happy to see him again on the field with the Algund team, a good example of balance and sportiness for the whole movement.
A special mention goes to Elisa Fischione of Floorball L'Aquila, a record of appearances in blue and the best Italian player of these first 20 years, and to Herbert Gius, stainless physicist and reference point of SSV Diamante.
Finally I want to remember Jorgen Olshov, with whom I have shared the passion for floorball for 20 years and to whom I have a personal relationship that goes beyond sport.
Leonardo Lanzoni, floorballmaniatv thanks you for the time you have dedicated to us and for accepting our interview.