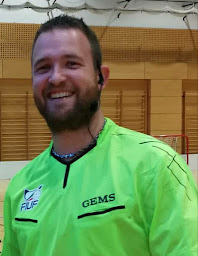 Today we inaugurate the new section dedicated to Italian referees, if you have any questions on the rules, write to us at floorballmabiatv@gmail.com or on the social pages, Instagram and facebook, we will collect them from our experts in the sector.

Today we abandon the Played roles and go back to talking about Referees and rules. Today we want to inaugurate a new section, dedicated to the rules and we have them explained by our arbitration sector.

We invited the Italian head of the arbitration sector, Roland DE CONNO POBITZER, to answer our questions.

International referee with proven experience in Italy, with Roberto Calegari, they form the most reliable national couple.

Hi Roland how are you?

Hi Dario, well thank you, I am looking forward to starting the next season, there will be new regulations and also two new faces, Riccardo Lombardo and Massimiliano In Ink, who will plow the national fields as a new external couple.

Take advantage of the opportunity to thank them for the nice words they spent on me. We put a lot of trust in them and we are sure they will do well.

1) Roland we start with curiosities, which rule will change starting this fall?

Already in April we were contacted together with other federations by IFF who wanted to test new rules to add or change the current regulation. Together with the FIUF we have decided to adopt a single rule of the 3 proposals.

What changes? It changes that the restart of the game, after a delayed whistle, will be carried out with a direct punishment for the team that suffered the foul, at the nearest faceoff spot where the action was interrupted and not, as per previous regulation , with an engagement. In this way we try to speed up the game further, favoring the team that plays in numbers.

So, I state that it has never happened to me to witness such a situation. Starting from the fact that the goalkeeper must get rid of the ball within 3 seconds of taking possession, and that he cannot get rid of it and then pick it up with his hand, he can kick it, on the fly or after he has touched the ground.

The important thing is that the ball does not come out of the field, touch the ceiling or pass the halfway line.

Otherwise there is a throw-in or a punishment in favor of the opposing team. I would add that a raise with the hand is always more precise than one made at the soccer goalkeeper to be clear.

3) If in kicking it, hit the ball with a ball that in the meantime, aware of the error, approached the rule of distance takes over or not?

The rule of distance from the goalkeeper in the raise is one of the rules most mistreated and misinterpreted by everyone. The famous distance of 3 meters (small field 2 meters) is calculated from the point where the goalkeeper comes into possession of the ball.

4) how is a thrust that causes the fall of a player, outside of it, considered on the bank? It clearly depends on what thrust the player who falls or exits the sides suffers.

If the thrust is correct, without running and shoulder to shoulder, the game continues freely. Otherwise a free kick is called and a possible penalty is given to the player guilty of the incorrect push.

5) if after a foul a player rages against the other and there is a reaction made of pushing, how should the referee intervene?

Certainly steps must be taken by warning the team captain of his teammate's unbecoming behavior. Obviously if the insults and curses are aimed at a player, an accompanying person or a fan, even of his team, he must be punished with a red card. 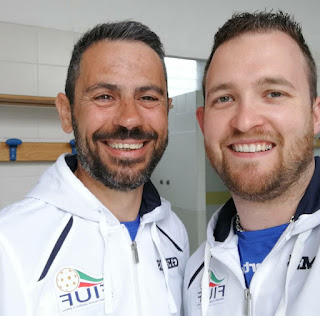 7) what should the referee check before starting the game? Until what time can a player arrive who is delaying his arrival on the field?

Before the game, a referee checks the pitch and its safety, playing shirts, ball, team benches and punished benches. A player must arrive by the end of the first half, and must be marked on the score sheet. Otherwise he cannot take part in the game.

8) A team that is delaying for traffic reasons, how long does it have before losing at the table? How many players can start the game between two teams?

As per the Vademecum, 15 field players and a properly equipped goalkeeper must be present 15 minutes from the start time of the game.

Otherwise the ball is thrown to the team that is on time. He can accept the delay and play the game regularly or declare it won at the table for 5 to 0.

In the end, the common sense of the teams is often enough to keep in touch during the journey, remember that there are 700 km away matches and that the unexpected is always around the corner. It also happens to us referees.

9) if there is a shot from outside the area, the goalkeeper drops the goal to save, the ball passes the goal line on his rejection, but does it at a doubtful height what should a referee do? Anyway give the goal? Or adjust or declare the high shot?

If the door moves you must always evaluate its imaginary figure. For this reason there are two demarcations on the floor.

Furthermore, it is necessary to evaluate if the goal was voluntarily moved by the defending team, in this case a penalty is called.

At the federation level it is not regulated, of course, if the second referee is unable and there are federal referees present, a compromise can always be found in agreement with both teams.

Otherwise the race is canceled and postponed. But let's say that such an event does not have to happen regardless. At FIUF level, efforts are being made to cover this gap.

Thanks Roland, Floorballmaniatv is very happy to have interviewed you. Thanks so much.

Thanks a lot to you, we hope to hear from you again during the season for a new episode dedicated to the referees.