At Floorballmaniatv, Michael BLAZIK, from the Czech Republic to Shanghai

Today we want to introduce you to a truly alternative character, he plays in China, in Shanghai, teaches, works, lives and makes floorball known in China.

We will tell you about a character that we want to find out better too.

Playing Floorball in Sweden, Finland, the Czech Republic, Switzerland etc. is normal, but doing it in China is different.

We are in the city of Shanghai, he is Michael BLAZIK, coming from the Czech Republic.

Hi Michael and thank you for accepting the invitation to our interview.

Hello floorball fans, thanks for the interview, I’m glad to see there is another global floorball news channel and I’m happy to be part of it.

Who is Michae Blazik? What do you do in life besides teaching and playing floorball in Shanghai?

It’s hard to describe myself aside from the floorball as my work is associated with floorball. I guess I’m an adventure person who likes to travel, experience new things and different cultures.

Michael, can you tell us about your life in floorball? When do you discover and start playing this sport?

I started playing floorball in the year 2000 when I was 9. One my friend introduced me to the sport and I joined the club he used to play in. I become really enthusiastic about the game and when I was 16 I also decided to be a coach. Later on I relised I am a better coach then player and started to focus on my coaching career. A big step for me was when I moved to Prague for my university studies and joined AC Sparta Prague, the biggest floorball club in Czechia. There, I kept building my coachiing career and become the headcoach of the Sparta U19 team and assistant coach to the men’s team. In 2014 I made a trip to Korea to help the Korean floorball association. They were preparing for the 2014 WFC in Sweden and I joined the team as a coach. I went to the WFC with the Korean team and in 23, I was probably one of the youngest coaches ever at the WFC.

Why are you moving to China? What is life like?

I had an offer to be a full-time floorball coach there. Life in China is very different from a European life. The culture difference is huge in all areas of life from food to work habits. I would call it a big adventure and a big life lesson. I think China is the land of oppurtunity nowadays and even with many downsides it has, I still like the life there and want to spend several more years there. Especially living in Shanghai. It’s a very progressive place with a lot interesting people.

How do you get the idea of playing and floorball in Shanghai.

In 2015 I was looking for another floorball adventure. I got in touch with the chinese and they invited me to help them organise a floorball camp for kids. Floorball wasn’t very developed at that time in China and there were just few participants. However the organisation offered me a full-time job, so after I graduated university, I moved to China to fully work as a chiefcoach and floorball promoter.

Can you tell us about the victory in the first local league? How is the current level of your Championship? In your opinion, knowing the self-denial of the Chinese people at work, how long will it také them to grow and have their say in this sport?

I think people from the west have a lot of stereotypes about China and Asia in general. I don’t really think that chinese work more than europeans, however they spend a lot of time at work.

Winning the first year of the Oriental floorball league was great. I have wonderfull memories of it, especially because I see the league as my child. It took me a lot of time and effort to persuade the Chinese floorball federation to launch a regular floorball league. When this happened, I was thrilled that the Chinese floorball got this huge impact. We’ve managed to form a solid team of the best chinese players. With a little help of me and my other Czech teammate we managed to secure a close victory in the finals and took home the gold medals. I was very happy. First that the league has succesfully concluded it’s first season and that I could score the winning goal in the finals.

The current level is much higher than it was in the first season. I can feel it with my game, when before my experience and skills played a huge role in the matches but nowadays the chinese teams have improved a lot and in this year, the third season, I suffered my first loss in the Oriental league. In general the level is still very low. All areas of the game need improvements – physical abilities, stick handling skills, tactics and game understanding but I think the future is bright and if the league continues to expand, China could be a force to be reckoned in the asian floorball world. 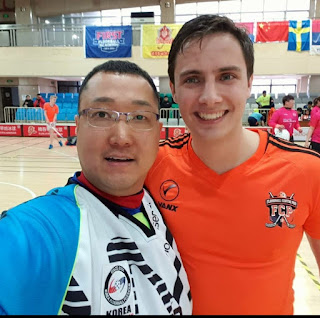 What is Salming CEO?

Aside from being a coach I have a company in China that represents the Salming floorball brand on the chinese market. As I am the boss of the company, I reffer to myself as Salming China CEO.

Can you tell us about your team? Do you a youth sector? Are the teams mixed, as in many parts of Europe, or is there a men’s and women’s championship?

My current team in China is FCP, which is a floorball team consisting of mainly european players that live in Shanghai. It’s actually the first and so far only club in China that has the whole age structure from small kids to adults. In China, the floorball is mainly the youth sector. The game is very popular among kids for it’s simple rules and easy playing.

The adults league was mixed in the first two seasons but for the third year new rules were applied and men and women have been seperated.

Have you ever thought, given your experience, to propose to train one of the Chinese national teams?

So far the national team in China hasn’t been fully formed. They have apeared at a few international events in Asia but currently the national team is not meeting regularly. I guess I could see myself in some position in the national team, but more-likely in an assistant/consultant role. Honestly, I think that asian teams should have the headcoach from their own country and hire a foreign person to assist and help the coach with floorball expertise. This way the floorball know-how can be shared and the whole floorball movement in the country benefits from this. In the future, I would be very happy to help the chinese national teams.

In Shanghai, how is life going after this pandemic period? Have you resumed team training? When will the new championship start with you?

The pandemic period was difficult. All life stopped and the precautions were very strict. Also the whole floorball life has been put on hold and hasn’t fully resumed. The adults league was canceled for this year and we don’t know when the next season will start as arenas still have some restrictions. Hopefully, life will resume to normal in September and we can continue with the floorball development.