This time Floorballmaniatv moves to the Czech Republic and precisely we move to a famous team.
A pure-bred striker, powerful physique, technically excellent, fast and gritty, truly the classic striker that no defender would like to have in front.
Class 2000 and already a great experience of international matches, he never gives up a single ball, pressing speed and a great shot are his trademark. We are talking about Josef Juha, called Pepa.
Hello! First things first, I would like to say thank you for having me in this interview.
1) Hi Josef, how are you? How did you get through this quarantine period?
1) Honestly I there was no real struggle for me during lockdown. I spent a lot of time with my family and in my homemade gym. So I was just fine.
2) I already know a lot about floorball, but many still don't, introduced to our readers. Who are you and what do you do in life besides them a great floorball striker?
2) I am 20 years old and besides floorball I am still a student.
From next semester I will be facing new challenge which consist of studying two universities at once and to be honest I am pretty excited to see how that will turn out.
Last but not least is the fact that me and my friends founded a floorball camp called Peaches KEMP which takes place every summer.  But in a nutshell I am sportsman who has high ambitions in a field of floorball.
3) last season crashed abnormally How do you think it went for you?
3) Last season was not succesfull for my team. We ended up 4th after a regular season which was way below our desired goal. And for me personally it was not the brightest season as well. 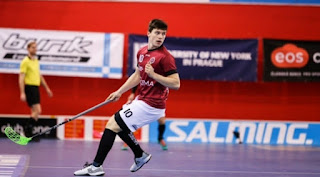 4) You play in a prestigious club, have you resumed training? What are your goals for the next season?
4) Yes. You have no idea how grateful I am for training conditions which were and still are provided by @spartaflorbal
We work with mentality where we strive for winning Czech superfinal in 02 arena.
5) What are the objectives for Pepa instead?
5) My personal goal is to be as much valuable to the team as possible. I really wish to have a great icetime this season so I can take responsibility on the pitch in important moments. Of course as a striker I want to score as many goals as possible in order to support the offensive play of my team.
6) What characteristics must an athlete have to become a striker? How many points did you score last season?
6) Tricky question. I think if someone wants to be really great he has to take a piece of skill from everyone who was great and on top of that add his own signature. For instance the shooting confidence which I try to study from Peter Kotilainen or Galante Carlström. I really enjoy watching them shooting from crazy positions and eventhough the shot goes wide away their team appraises them because that’s their role. Score. And as Gretzky would have said you miss 100% shots you don’t take. 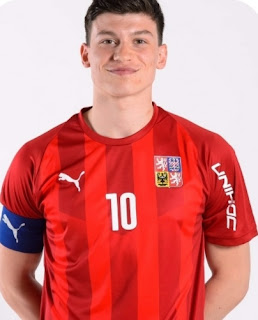 7) Do you think about the Czech national team? Are you already participating in the selections? Or are you already part of it? It will be a very young national team, where are you placing it in the next WFC?
7) After winning U19 Championship in Halifax, men’s team is my main engine now. Eventhough I havent received any invitation and havent actually even spoken to the head coach I know that the path to men.
I know that the path to the men’s national team is connected with a great deal of hardwork which I am really looking forward to.
Yes it will be very young but I believe the young players will try to prove that they should be in a squad and that will improve the game of entire national team.
8) Let's talk about you. What Player are you? Do you love assisting or scoring more? Do you help your teammates on the pitch? You are very popular on social media, in your opinion why?
8) When I was younger I was for sure the scoring type. But with the time my game changed and now eventhough I know that one of my strenghts is my shot, I still can create great opportunities to my teammates with good pass.
Haha, I bet they would love to answer that question for you. No but seriously, I am aware that sometimes I am difficult zo play with because I want things to be perfect when on the pitch. Same on the practice. I am super competitive and would eat my teammate for a win, haha :)
I dont think popular is the correct word, but overall I Just Enjoy creating a good sport and my daily life content, in Czech Republic it is not always received in a good way but it is how it is and it wont change the fact that I Enjoy sharing my training routines and so on with my followers. 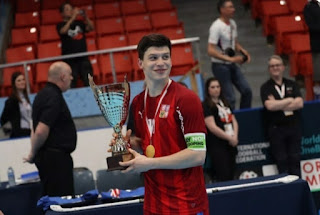 9) To a child who asks you how to become like you, what do you answer? What would you say to a mom, to convince her to let her son do floorball instead of a more famous sport?
9) Find one thing which you really enjoy doing and give it 100% of your focus.
Well luckily my mother saw that I enjoyed floorball from the very beggining so I had the advantage  that I did not have to say anything. :)
10) let's play a game. Build a top line, with the strongest players you know, with you as a striker, starting with the goalkeeper.
10) As a Goalkeeper
Pascal Meier
Defenders
Emil Johansson
Tatu Väänänen
Mathias Hofbauer as a centerforward
And probably Eemeli Salin as a left wing.
Thank you so much Pepa for taking the precious time, Floorballmaniatv will follow you and maybe do or a new interview.
Thank you for questions, they were fun to answer.