We move to Estonia and take you to meet a young goalkeeper, of sure future.
Cold in front of the opponents, he leaves them the last move and then explodes at speed. He does not fear any attacker and he does not fear any opponent, giving his team absolute security.
We are talking about Marten Teppan.
Hi Marten, Floorballmaniatv is happy to have the chance for this interview.
1) Meanwhile, tell us how you are after this bad period. Then introduce yourself to our readers, who are you and what do you do in life besides floorball?
1)Hello Floorballmaniatv.
Thank you for your interest about interviewing me.
I am doing pretty good considering this bad situation. I live in countryside so I have lot of free space and of course a lot of homework to do. I am soon during 16 and in September I'll start my first year in High school. I am from big family. In my family there are my mom, dad and I have three sisters and two brothers. My youngest sister and brother are also playing floorball.
2) When do you discover floorball and when do you start playing? Which team did you start playing with? Can you describe your team?
2)I started playing floorball when I was about 4 years old. My older brother played floorball back then and Everytime when he was rehearsing at home I had to  be goalkeeper. I started playing in JSK Tähe when I was 8 years old.
3) Why do you choose to be a goalkeeper? Can you tell us about your first training?
3) I quit playing for about one year because back then I started as a player and I was new there. I didn't have any friends there and I was bullied. I was to young to handle it and I wanted to quit. I continued playing at home with my brother. Then I started playing again in JSK Tähe as a goalkeeper. 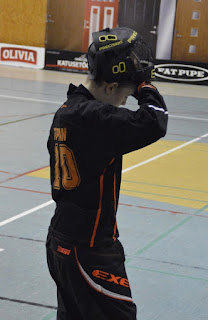 4) Last season ended halfway, how do you think your team was doing? How do you think your season was going instead? In Estonia there are many talents, but under 19 still can't fly, Why do you think? Have you ever attended Estonian national team rallies?
4)Last season ended how it ended because of Corona. But we won all the games in men's second league with U16. And we won all the games in U16 league. So I think we did amazing job, and I am very proud of us. Corina changed a lot, but season ended how it should be - to still being a Estonian champions and this year in three different leagues.I think floorball hasn't been that popular in Estonia before. We haven't had good players and trainers but now our team has been really serious about it. Right now I am not a member of any Estonian national team, but I wish that one day I will be.
5) What are your goals for the next season? And which ones from your club? If you could make a wish in the floorball, what would you ask? We all have an idol to follow, who do you inspire yourself? Which goalkeeper would you like to look like?
5)Floorball has been growing a lot in Estonia and our team is working really heard to achieve much.I don't have any idols, because I don't compare myself to another person. I believe that if I work hard enough I will be even better than some famous goalkeeperes right now. I do admire Kalde, who is he my main team mens league goalkeeper he is really good. 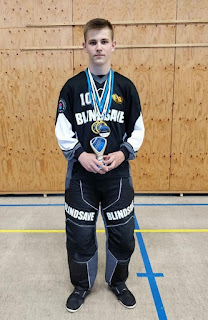 6) Which are the strongest players you have ever played against and why? If you could play with any of them today who would you like on your team? We play a game. Build a line of play, with the senior players you think are the strongest in the world with you inside as a goalkeeper.
6)The strongest team I have played against with were from Latvia. We lost the game in semi-final.I would like to play in Estonian national team, and also I would love to play in Sweden or Finland team.
Thank you so much for your availability Floorballmaniatv is happy to have interviewed you and hopes to meet you soon.